What is climate change?

Our planet is heating up fast, and scientists have proven that the rapid changes we’re seeing are not due to natural phenomena; they are due to pollution. Approximately 2/3 of the pollution that is driving climate change is from the burning of fossil fuels – coal, oil, and natural gas – with another quarter of the pollution coming from deforestation and agriculture.

Who will be affected by climate change?

When most people think about climate change, they think about polar bears clinging to melting glaciers. It’s true dramatic warming will continue to occur in the North Polar, but as the planet continue to overheat we will see a variety of impacts – from flooded cities and more frequent storms, to scorching heat and raging wildfires. These changes will have secondary impacts, including economic volatility and even human conflict. Climate change will affect everybody on earth.

The primary driver of global climate change is the burning of fossil fuels. CO2 and other emissions produced from coal, oil, and natural gas accounts for a full 2/3 of total heat-trapping gases emitted into our atmosphere. Emissions from deforestation and other land use changes plus emissions from the agricultural sector accounts for another 24%. Cement, waste and industrial chemicals called F-gases account for the rest. 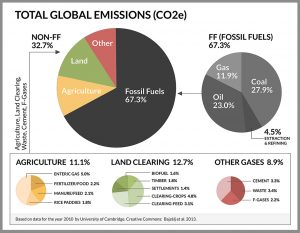 Can we stop climate change?

The good news is that climate change can be solved today with readily available technologies and sustainability measures. It will take significant investments on the part of governments and businesses, but that investment will be a small fraction of the price we would have to pay for increasing natural disasters and other climate impacts. New research has shown that using currently available technologies, we can meet all of our energy needs for heating, electricity, and transportation through 100% clean renewable sources by mid-century. We can get on track by 2020, when the Paris Agreements enters into force by reducing pollution through a price on carbon and protecting our forest and ocean ecosystems.

What can I do as an individual?

You might feel helpless, but there are many things you actually can do!
Remember that every action you take is a vote for a certain method, product or approach. By making better choices you can already have a significant impact and let your voice be heard. Our top 3 tips for making an impact:
1. Offset your carbon emissions.
2. Cut down your meat consumption, especially beef and veal.
3. Be aware of the choices you make, everything you do makes an impact. You can choose whether this is good or bad.

What is Carbon and why is it bad?

Carbon is a very abundant element. It exists in pure or nearly pure forms – such as diamonds and graphite – but can also combine with other elements to form molecules. These carbon-based molecules are the basic building blocks of humans, animals, plants, trees and soils. Some greenhouse gases, such as CO2 and methane, also consist of carbon-based molecules, as do fossil fuels.

In the context of climate change, “carbon” is commonly used as a shorthand for carbon dioxide, the most important greenhouse gas released by humans. Technically, however, this isn’t accurate. Carbon only becomes carbon dioxide when each atom of carbon joins with two atoms of oxygen (hence the chemical formula of carbon dioxide, CO2).

This shorthand can sometimes cause confusion, because although “a tonne of carbon” will often be used to mean “a tonne of CO2”, in a scientific context the same phrase could mean “CO2 containing a tonne of carbon” (which is a much smaller amount, as oxygen accounts for most of the weight of each CO2 molecule).

The term carbon also crops up in the phrase carbon footprint, which describes the total amount of greenhouse gases released as the result of a given activity. In this context, “a tonne of carbon” may mean something else still: “a mix of greenhouse gases with a combined warming impact equivalent to that of a tonne of CO2”.

Carbon molecules move around the Earth system in the carbon cycle.

What is Carbon Offsetting

A carbon offset is a reduction in emissions of carbon dioxide or greenhouse gases made in order to compensate for or to offset an emission made elsewhere.
For example, if you have have driven your car and have caused carbon pollution; you can compensate these emissions by preventing the release of carbon somewhere else in the world.

Why should I offset?

We are all responsible for this planet. Scientific consensus states that carbon emissions must be reduced by 80% by 2050 to avoid a catastrophic increase in temperatures. You can take responsibility for your own actions by compensating your emissions.

How does Carbon Offsetting work?

The amount of CO2 you have caused is compensated somewhere else.

What is the cost per tonne of CO₂?

This is dependent on the project, but most projects we support have a prevention of 1 ton of carbon dioxide for every €10,- invested.

No, unfortunately not. Even though you offset, the carbon was initially still produced.
In time we will need to get (close to) zero CO2 emissions globally.
However, by offsetting you help with a much faster transition from fossil fuels to a clean future.
As we are running out of time every day counts.

What is better: to reduce my carbon footprint or to offset it?

Eventually we need to get close to zero emissons, so the main goal is to prevent carbon emission.
However, in the current world it is sometimes impossible to prevent; in which case you need to take responsibility for your actions and compensate your carbon emissions.